Bringing the Heat (and Light)

Todd Watkins is tracking the diversification of microfinance. 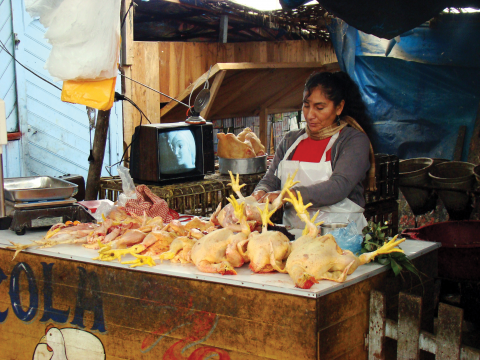 Microfinance–the practice of giving small loans, savings accounts and other financial services to low-income individuals or groups who wouldn’t otherwise have access to such services–gained international attention when Muhammad Yunus and the Grameen Bank received the Nobel Peace Prize for their work in developing countries in 2006.

Since then, what once was a little-known tool outside of international aid circles has become a widespread method of financing development in regions where people are often denied savings accounts or loans or insurance because they lack wage jobs or collateral or other formalities banks usually require.

The success of the microfinance model attracted private investment, and now the bulk of the activity is in commercial institutions, according to Todd A. Watkins, professor of economics at Lehigh, executive director of the Martindale Center for the Study of Private Enterprise and the author and editor of three books on microfinance.

“There are plenty of nonprofits still at work doing all sorts of great things, but the bulk of the clients are in institutions that are essentially for profit, some which have gone public on stock markets,” Watkins says. “It’s really broadened the nature of the financial service products available to the poor.”

These days, microfinance is playing an important part in efforts to alleviate energy poverty in developing countries while advancing the use of clean energy such as solar.

In a paper for the journal Development in Practice, Watkins and coauthor Lehigh grad Karli Manko ’20, examine the use of microfinance in such regions as sub-Saharan Africa and South Asia, where large percentages of rural people live without electricity. Affordable clean energy is one of the UN’s main Sustainable Development Goals.

Many developing areas don’t have traditional energy grids to make power accessible to villagers. Instead, families are forced to use hazardous methods for cooking.

“A lot of women in these areas are cooking with wood or charcoal in their houses or just outside their houses, so they and their families are breathing in those particulates,” Watkins says.

Microfinance, through small loans and field operations leveraged for distribution, fosters getting high efficiency cookstoves into such low-income homes. For years, Watkins took Lehigh students to BURN Manufacturing, a company north of Nairobi, Kenya, to see how the business makes those stoves. A Lehigh grad, Christopher Akin ’99, who was BURN’s vice president of global sales, would show them around.

“These cookstoves were highly engineered to prevent deforestation, that was the founders’ goal,” Watkins says. “It's a full-scale manufacturing facility, employing hundreds of local Kenyans.  About half of the employees are women.”

Each cookstove reduces carbon emissions by 1.4 metric tons annually and BURN Manufacturing has sold more than 600,000 since 2013.

Watkins’ research also looks at the use of microcredit for the installations of solar systems in regions of East Africa. A solar power provider, M-Kopa, uses microcredit and mobile money systems to get their solar technology into homes. “Customers make a small deposit and then through their cell phones remotely make daily payments of 50 cents to $1 for approximately a year to pay off the balance,” Watkins explains. If they don’t pay for a week, the solar system turns off but can be turned on again with payment.

The upfront costs can be fairly steep without microfinance, but the ongoing costs are fairly low. “Once you install them, you can save money every day on kerosene or charcoal or whatever,” he says.

In this way, microfinance has altered the landscape of infrastructure development. Rather than waiting for each nation’s government to extend the country’s energy grid to more rural areas, the distributed installation of solar panels and solar systems by hundreds of thousands of rural households is allowing low-income people to light their homes and cook. It’s similar to how phone service looked without the traditional telephone wires and poles.

“Instead of developing the large-scale infrastructure of telephone wires and centralized switches, a lot of countries skipped over that altogether and went straight to cell phones,” Watkins said.

Studies have shown that microfinance fuels the expansion of microenterprise and brings large-scale capital to the clean energy sector, Watkins says.

Hundreds of millions of microenterprise owners, like the Peruvian poultry vendor pictured above, use microfinancial services like savings accounts, small loans and microinsurance.