From Mountain Hawk to IronPig 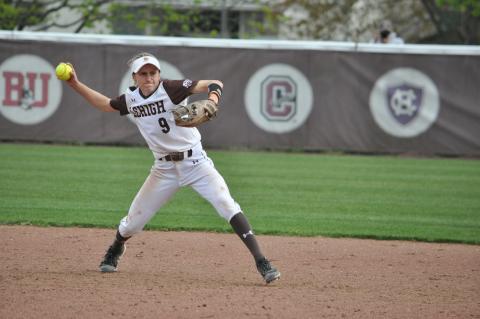 When softball player Carley Barjaktarovich ’22, an HR management and marketing major, chose to become a Mountain Hawk, she never anticipated becoming one of the first college athletes in the country to sign an endorsement deal with a professional sports team.

Just one month into her 2021 internship with the Lehigh Valley IronPigs, the Triple-A affiliate of the Philadelphia Phillies, Barjaktarovich was promoted to a full-time role with the baseball team’s ticketing office. And almost immediately following the Supreme Court’s ruling against NCAA restrictions that kept college athletes from profiting from their name and likeness, the IronPigs scooped her up as their paid spokesperson.

“I was shocked, but I’m settling into it,” says Barjaktarovich, “The IronPigs are a great team. And I really wasn’t expecting them to offer me this kind of opportunity after such a short time there!”

“It’s interesting to see so many of the topics discussed in my social media marketing class last semester being utilized in a real-life scenario,” says Barjaktarovich. “I have been applying so many of the tactics I learned at Lehigh.”

“One of the biggest things for me is to learn from everything and every situation. I’m not just learning information, but also how to react to situations using what I know,” she adds.

Barjaktarovich’s impressive list of achievements spans both the academic and sports worlds from mentoring other student athletes to earning the Patriot League Scholar Athlete of the Year to being awarded the Nelson Leighton Bond Memorial Prize for outstanding scholastics achievement, character and leadership.

“In the end, I am just looking to be a positive addition to Lehigh University and the IronPigs family—a friendly face that offers as good an image as I can give,” Barjaktarovich explains.