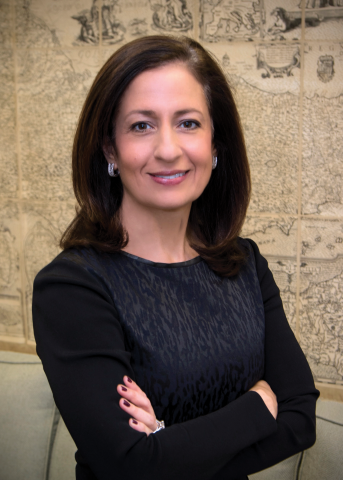 The first in her family to attend college, Chrin had not set eyes on Lehigh University’s campus until she arrived in Bethlehem from her native Honduras to begin classes in 1983. Immediately following her 1987 graduation, Chrin continued on to receive her MBA from Columbia Business School.

“My grandmother instilled in me the importance of education, despite her inability to attend college,” Chrin says. “I would not be where I am today without her encouragement or the exceptional education I received.”

Armed with the university degrees her ancestors were not afforded, Chrin began her career and 15-year tenure at Goldman Sachs. An entrepreneur at heart, and ultimately, a top business producer for the firm.

“Over the years, I’ve cultivated a network based on trust. Colleagues, friends, employers, educational institutions, and even competitors, have exponentially broadened the opportunities I have had,” Chrin explains. “Developing deep personal connections has been the secret sauce to establishing myself and strengthening my professional growth.”

In 2007, Chrin founded Circle Wealth Management, a women-owned, independent investment management and wealth advisory firm based in New York City. Chrin sees Circle Wealth Management as “a different kind of advisory firm,” one that empowers clients (80% of whom are women) to organize their finances and invest well. “I believe in partnering with and educating our clients in all areas of their financial picture,” Chrin says. This holistic approach has led to growth in assets under management of over 25% per year since the firm’s inception.

Chrin’s sense of self and deep-rooted values are engrained in all that she does; she manages the firm with a people-first lens, ensuring that both her colleagues and clients are well taken care of—personally and professionally. “I’ve found that authenticity is contagious; the firm’s growth has been almost entirely referral-based and I attribute that to the integrity and ethics of our team, traits Lehigh trained me to look for.”

Just as her Lehigh professors did for her, Chrin inspires a culture of innovation and advancement. “Be it through our investment approach or the way we work, on a daily basis, I encourage our team to challenge the status quo.”

Obstacles as Fuel for Change

When she began interviewing for her first job, Chrin quickly found herself faced with gender bias. As she and her husband, John R. Chrin ’85 ’86 ’10P, compared notes, she saw an obvious pattern in how companies viewed men and women differently when it came to parenthood.

“It was an interesting dynamic because I would see my husband praised for being a father, whereas I was questioned as a mother,” Chrin says. “When my husband was interviewing, the fact that he needed to provide for a young child made him desirable; it demonstrated that he was a ‘responsible man’ and that he would be a ‘focused employee.’ For me, there was an assumption that I couldn’t ‘hack it,’ that I would feel conflicted, and that I would not work hard enough or for long enough hours. I was swiftly dismissed.”

Others in Chrin’s shoes might have felt discouraged and may have given up. “For me, the experience was the fuel I needed to prove that I could do both: be a good parent and have a meaningful career.” Leaving a number of obstacles behind her, Chrin has paved the way for future generations.

Lehigh: Shaping Our Past, Present and Future

Chrin believes part of giving back includes mentoring young women in college and those just starting their careers. “I’ve always felt that Lehigh took a bet on me, and there are plenty of other students and new professionals that deserve the same chance.”

Chrin met her husband John at Lehigh, a fellow first-generation college student who grew up in Bethlehem.

“Starting our journey together at Lehigh built for us a foundation of giving back and supporting others. Over the years, John and I have felt compelled to support our alma mater, and not only the university in general, but also specific scholarship programs and the Lehigh community at large,” she says.

Chrin has been a member of the Lehigh Board of Trustees since 2004, currently serving as a board vice chair and co-chair of GO: The Campaign for Lehigh. She was the first woman to chair the investment subcommittee, which oversees the university’s endowment, and co-chaired the presidential search committee that led to the selection of Joseph J. Helble ’82.

“Lehigh has had a lasting impact on John and me; we’ve also seen the high caliber, distinguishable results of the College of Business in our son, who graduated in 2010, and in the many Lehigh alumni we have hired over the years,” Chrin adds. “Our pride for the institution has kept us connected to Lehigh in countless ways. Knowing first-hand how exceptional the university is, it is no wonder that we gravitate toward those with mountain hawk spirit.”