Published by Muzhe Yang under Economics on March 19, 2021

In this episode of Lehigh University’s College of Business IlLUminate podcast, we are speaking with Muzhe Yang about his research looking at how various factors during pregnancy — including light pollution, most recently — affect maternal, fetal and infant health.

Dr. Yang holds the Charles William McFarlane Professorship in Economics in Lehigh's College of Business. His research aims to provide empirical evidence on causal relations that have policy implications. Examples in recent years include fetal health effects of long commutes to work during pregnancy, maternal and fetal health effects of working during pregnancy, and the effects of power plant emissions, air pollution, noise pollution, light pollution, and water pollution on fetal and infant health.

He spoke with Jack Croft, host of the ilLUminate podcast. Listen to the podcast here and subscribe and download Lehigh Business on Apple Podcasts or wherever you get your podcasts.

Below is an edited excerpt from that conversation. Read the complete podcast transcript.

Jack Croft: In recent years, a common thread tying together much of your research has been a focus on how a range of factors affects fetal and infant health, including babies born at low birth weight. How did you first become interested in this topic?

Muzhe Yang: The story goes back to a study I did about 10 years ago on the impact of California's paid family leave on mothers' breastfeeding behaviors. During that study, I learned that the U.S. is the only high-income country that does not guarantee paid leave to new mothers. I was also shocked to learn that the U.S. is ranked very last on every measure of family-friendly policies among all high-income countries. All this learning has made me become interested in topics related to maternal and infant health.

Also, to my surprise, the paper I did on California's paid family leave later was cited by the Council of the District of Columbia regarding Washington, D.C.'s paid family leave, which became effective in 2017. This experience let me realize that what we do as a researcher actually can influence policymaking. And I see my research endeavors as a way of speaking for the vulnerable members of a society, such as infants and pregnant women. 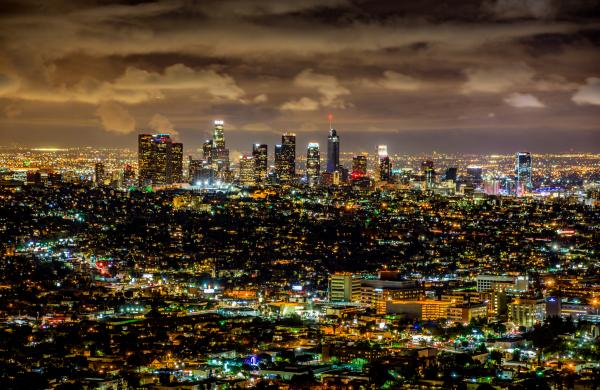 Yang: Light pollution includes three components: sky glow, light trespass, and glare. In our study, we focused on skyglow, which is the main component of the three. Skyglow is a result of artificial lighting at night. One important thing we need to note is that exposure to artificial lighting at night can disrupt our human bodies' biological clock. Specifically, the disruption is a suppression of the production of melatonin, a hormone that regulates a human's sleep/wake cycle.

Croft: How extensive is the problem of light pollution, both in the United States and around the world?

Yang: It is a worldwide and ongoing problem. In many cities in the U.S., artificial lighting at night is nearly 10 times brighter than natural nighttime light. Studies have shown that in recent years, there has been an increase in light pollution in many countries. And light pollution has remained consistently high in some countries like the U.S., Spain, Italy, and the Netherlands.

Croft: It reminds me of something you said when we first talked about your research three years ago. And I'll read back that quote where you said, "As an economist, I am always thinking about trade-offs, the benefits, and costs of decisions, as well as the unintended consequences such as externalities." And I'm wondering what insights you've gained about those trade-offs from your research in the area of fetal and infant health, in particular, over the years of looking at these kinds of issues?

Yang: Usually, the trade-off is a result of making an optimal decision under a constraint. If there are no constraints, there will be no trade-offs. And very often, the trade-off is not a situation that is unique to a single person, a single state, or a single country. So I think it is important to learn from others about how to deal with the trade-off. Here, let me use light pollution as an example. A bright night sky is often viewed as a symbol of prosperity. Indeed, some economic studies have already used satellite imagery data of nighttime sky brightness to infer economic growth. So it appears that artificial lighting at night is the price we have to pay for economic development. But in reality, it doesn't have to be this way.

Take the comparison between the U.S. and Germany as an example. Studies have shown that cities in the U.S. use many times more artificial lighting at night per capita than cities in Germany. Some of the difference in lighting usage could be explained by the fact that cities and towns in Germany are lit much more conservatively at night. This comparison between two equally prosperous countries highlights the possibility that light pollution is still a choice which should be made after careful consideration of all of its potential costs and benefits.

In the case of light pollution, and more generally, I believe there is always a lot to learn from others in dealing with the trade-off that comes from making optimal decisions under constraints. We need to be careful observers.

Croft: I know in most of the cases that I'm familiar with, at least, regarding the brightness of lights in cities, the discussion seems to focus almost exclusively on safety. And that--

Croft: --having it look as bright as day will make your city safer. And I don't know that these other factors are even discussed as they're making those kinds of decisions.

Yang: There have been legislation in the U.S. about the proper use of street lighting. And actually, more recently — in January 2019, April 2020 — lawmakers in Massachusetts also introduced bills in the House and Senate, including a call to study the adverse health impact of excess light exposure aimed at reducing light pollution through shielding the roadway and public lighting.

I also want to mention that in the EU, the European Union, has issued a call for all outdoor lighting to follow the rule of lighting at levels as low as reasonably achievable. And this is commonly known as ALARA [an acronym for as low as reasonably achievable]. So this call is really combined with the expectation that street lights should not radiate above a horizontal plane from the source, and it requires that street lighting should dim at curfew. Our study of light pollution suggests that we should be aware of the health effects of lighting at night.

Muzhe Yang, Ph.D. is a professor in the Department of Economics at Lehigh Business.

This Is My Research: Residential Noise Exposure and Health