Addressing Our National Debt: This Tax Reform Is Not The Answer

Published by Robert Duquette under Accounting on November 27, 2017

For all the partisan and intra-party squabbling about tax reform, it seems clear that if it passes, it will add at least $1.5 trillion to our national debt over the next decade.

In my previous post, Why You Should Care About the National Debt, I discussed three things: the nature of the $20 trillion debt and its projected increase to $30 trillion in 10 years (not factoring in major tax cuts); how the biggest driver to this debt—projected entitlement program payouts totaling $50 trillion in present-value dollars—isn’t included in those national debt totals; and the serious future fiscal challenges countries face when their debt-to-Gross Domestic Product (GDP) ratio exceeds about 60 to 100 percent. We are approaching the high end and will be firmly there within 10 years.

The Congressional Research Service’s 2016 report described the potential consequences of our burgeoning debt problem. These include: decreased economic growth and private investment, spending reductions and tax increases, and increased interest costs and/or price inflation due to lowered confidence in the United States’ ability to repay its debt.

This all leads to increased borrowing costs for mortgages, car loans, and credit cards, and consumers needing to ration and prioritize what they purchase due to inflation.

To avoid this future, different solutions have been proposed: significantly raise taxes on the wealthy and corporations, cut spending dramatically, or grow the economy faster. Let’s examine each one.

In a word, no. According to the U.S. Treasury Department, last year’s deficit was $666 billion. With total tax receipts of $3.3 trillion, corporate income taxes of $300 billion made up 9 percent, while personal income taxes ($1.6 trillion) accounted for 48 percent.

Therefore, to cover that level of deficit (assuming the tax base couldn’t be broadened), individual rates would have to rise a staggering 42 percent ($666 billion as a percentage of $1.6 trillion), or the 35 percent corporate rate would have to more than triple.

Clearly, these tax increases would be ridiculous; even gradual increases over five years wouldn’t cover all the annual deficits during that time, let alone the trillion dollar deficits expected at the end of that period.  Besides, the lowered productivity and investment resulting from those rate increases wouldn’t raise the same proportion of tax receipts per one point of tax rate compared to our current tax code.

In theory yes, but not likely, as past attempts haven’t succeeded. The President’s National Commission on Fiscal Responsibility and Reform issued a series of recommendations in 2010 to address rising entitlement costs, such as lifting the payroll tax wage cap, raising the rate on upper-wage incomes, means-tested cutbacks to higher income and wealthy individuals, and increasing the Social Security eligibility age. Implementing those recommendations now, seven years later, would be much more painful, and almost impossible given the deep divisions in our national politics.

The Budget Control Act of 2011 (BCA) was created to cut spending by about $1.2 trillion over 10 years. When Congress could not, mandated cuts known as “sequestration” were triggered to affect defense, Medicare,  and all discretionary programs. But these planned cuts were either largely postponed, limited, or eliminated through the Bipartisan Budget Acts (BBA) of 2013 and 2015.

Legislation has also added to the debt. In 2015, Congress permanently repealed a mandated 21 percent cut in Medicare reimbursements to physicians and passed the largely unfunded Highway Trust Fund appropriation, adding another $190 billion to the debt over the next 10 years. These 2015 actions totaled another $1 trillion in debt over the next decade. And just this year, we may have to authorize more than $100 billion for hurricane relief not originally budgeted.

I am not suggesting these spending priorities aren’t appropriate—our needs are great. But they illustrate the enormous difficulty in getting Congress to cut spending viewed as important to voters and/or special interests that finance campaigns.

Could the Economy Grow Enough to Stop Deficits?

Highly unlikely. Total tax receipts ($3.3 trillion) made up 17 percent of last year’s GDP of $19.5 trillion. Assuming that rate of generating tax receipts remains the same, we could theoretically generate $170 billion in tax receipts for every $1 trillion of additional annual GDP growth. Thus, the economy would have to grow another $4 trillion (20 percent) in one year and not regress after that to cover $700 billion annual deficits.

This would be impossible, considering the U.S. has never grown real GDP 20 percent in one year. And the Congressional Budget Office is only projecting  2 percent “real” annual GDP growth over the next 10 years, with an additional $10 trillion deficit projection for that period.

So, how much more GDP growth per year would be needed to make a dent in the deficits?

At least 5 percent, just to start. Even if we could spread the additional 20 percent GDP over four years with 5 percent annual growth, it still wouldn’t cover the entire deficit in those years, let alone the trillion dollar deficits we will face five years from now.  Finally, keep in mind we didn’t even achieve 5 percent annual growth in the booming 1990s. 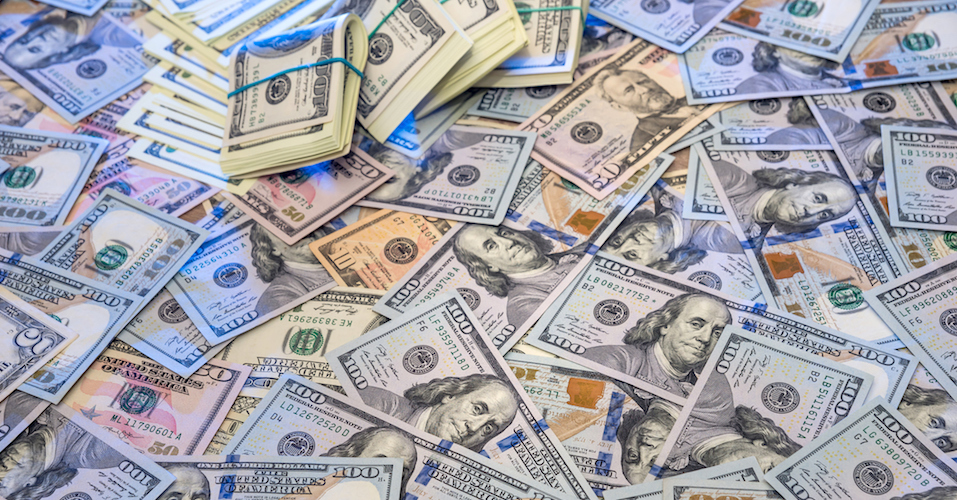 Will the Current Tax Reform Proposals Achieve the Growth We Need?

That is also highly unlikely. Despite the President’s Council of Economic Advisors recently claiming tax reform would create an average annual household wage growth of $4,000 to $9,000, both the Tax Foundation and Tax Policy Center forecast that tax reform will grow GDP less than 0.5 percent annually. To help push through tax reform, advocates make the case that those studies are flawed, and that tax reform will “pay for itself.” This is based on controversial “supply side” theory that holds that the tax base would grow substantially from rate cuts. However, the relationship between rate cuts and wage and job growth is not well established.

The Congressional Research Service concluded in a 2014 report that tax-rate cuts often provide little to no growth. Meanwhile, the shortage of skilled labor, an already low 4 percent unemployment rate, and lower wage rates in foreign countries have all prevented companies from significantly growing here, despite them sitting on trillions of dollars in excess capital!

The lack of certain provisions in the current proposals will also hinder tax reform’s impact on economic growth: None of the business tax savings from the lowered 20 percent corporate rate, the decreased rate from bringing back un-repatriated foreign earnings, or special relief to pass-through businesses have to be reinvested in new expansion or job creation in the U.S. The last time we encouraged repatriation, in 2004, most companies cut jobs while rewarding shareholders.

When CEOs were asked at the recent annual Wall Street Journal CEO Council Forum how many would reinvest in U.S. capital investments, very few raised their hands. And who’s to say additional capital expenditure spending wouldn’t result in automation that eventually replaces middle-class and lower-wage workers?

What is so hard about writing statutory language to tie business tax savings to actual job growth? Is tax reform being rushed for partisan reasons? Is there a failure to understand, or care, what is at stake here?

These are the sobering facts. The current tax reform effort should have focused more on ensuring, instead of merely encouraging, unprecedented growth in order to curb the trajectory of our national debt.

If it passes, hopefully its advocates are correct that it will pay for itself through historic economic growth; otherwise our standard of living may dramatically shift downward, affecting the poor and middle class the most, turning us into an unrecognizable nation a decade from now.

My sense is that this has already begun.

Robert Duquette is a professor of practice in the Department of Accounting at Lehigh Business.